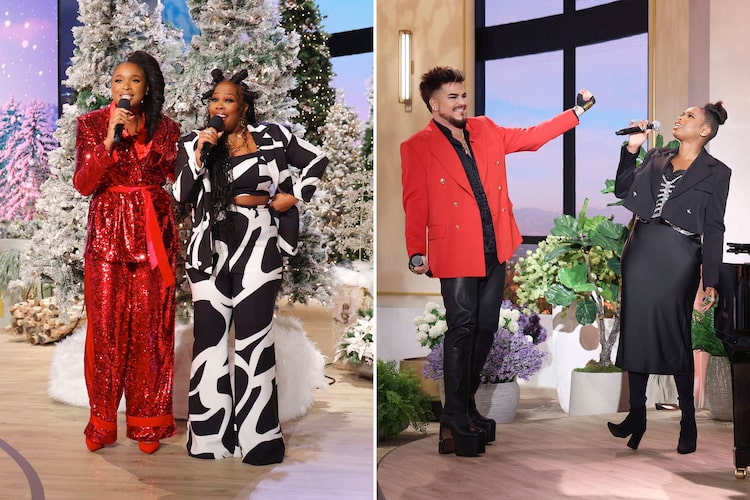 You know a show hosted by Jennifer Hudson is gonna have some incredible performances! JHud picked up the mic and delivered plenty of showstopping numbers in 2022, but there were even more powerhouse vocals on display thanks to some supremely talented guests. Check out our favorite musical moments from Season 1 of “The Jennifer Hudson Show” so far!

1. Amber Riley & Jennifer Hudson Sing ‘And I Am Telling You I’m Not Going’

Both JHud and Amber Riley have breathtaking renditions of the showtune “And I Am Telling You I’m Not Going” under their belt — Jennifer from her Oscar-winning turn in “Dreamgirls,” and Amber from a Season 1 episode of “Glee.” So naturally, the two just HAD to duet on this iconic number when Amber guested on the show in early December. This Effie-off is not to be missed!

2. Adam Lambert & JHud Perform with a Friend from ‘American Idol’

While visiting the show in October, Adam Lambert recalled performing “Nessun dorma” in Italy with Queen over the summer. Of course, JHud then invited Adam to sing the aria with her right then and there, accompanied by Michael Orland, the pianist they both worked with during their respective seasons on “American Idol.” These two incredible performers really can sing anything!

We love seeing family collaborate on creative pursuits, and this father-daughter beatboxing duo blows us away. Ed Cage and his daughter Nicole Paris came by “The Jennifer Hudson Show” in September to show off their insane beatboxing skills. Even more impressive is their infectious excitement over chatting with JHud!

Appearing on the show in October, multi-hyphenate music icon Babyface paired up with JHud to sing about everything from hot dogs to fire safety, thanks to the studio audience’s silly suggestions.

In another improvised musical moment, comedian and singer Tichina Arnold joined JHud for some freestyle singing, coming up with rousing gospel-inspired tunes based off the audience’s suggestions. We promise, “Dang it, I peed before I woke up” will be stuck in your head all day!

Broadway actor and “Pose” star Billy Porter had to get in on the fun when he came on the show in early December. Billy and JHud play “You Say It, We’ll Sing It,” turning innocuous phrases like “Get off the couch” into incredible musical moments.

Josh Groban appeared on “The Jennifer Hudson Show” in November, and you can’t get Josh Groban and JHud in the same room without a couple of microphones coming out! Watch these two amazing singers perform “The Impossible Dream” from the Broadway musical “Man of La Mancha.”

No one has been more excited for ANYTHING than JHud’s studio audience for NCT 127! The global K-pop superstars had the “Jennifer Hudson Show” studio audience literally screaming for more when they stopped by the show in October to perform their song “2 Baddies.”

9. Cardinal Divas of SC on the Origins of Majorette Dance at HBCUs and Team Controversy

The college dance troupe Cardinal Divas of SC stopped by the show in September to deliver a fierce performance in front of the studio audience. The Cardinal Divas are making history as the first ever majorette dance troupe at the University of Southern California, celebrating the dance style that originated at historically Black colleges and universities. Just watch how happy they are busting those moves!

Of COURSE we had to include Jennifer’s epic “Sister Act” medley during the Halloween show! Inspired by Whoopi Goldberg’s character Deloris Wilson — aka Sister Mary Clarence — JHud brought the whole studio to church with her crowd-pleasing performance of songs from “Sister Act” and “Sister Act 2,” including “I Will Follow Him,” “My Guy (My God),” “Oh Happy Day,” and “Joyful, Joyful.” Amen!