Months after she won her Tony Award, Jennifer Hudson showed off her new statue on Instagram alongside her Emmy, Grammy, and Oscar.

Dressed in a bright and beautiful lilac button-down knit dress, JHud proudly held up her Tony as the rest of her coveted awards sat on a grand piano.

“Look what arrived yal!!! @thetonyawards@strangeloopbway,” the host of “The Jennifer Hudson Show” wrote to her millions of followers.

To celebrate receiving her trophy, Jennifer showed off her chart-topping vocals and love of theater when she performed a medley of her favorite Broadway songs, including “Tomorrow” from “Annie,” “Circle of Life” from “The Lion King,” and “How Blest We Are” from “Big River: The Adventures of Huckleberry Finn” — which Jenn sang as a teen in her hometown of Chicago!

“In honor of my Tony, I had to take a trip down memory lane revisiting some of my favorite Broadway songs I’ve performed throughout my career — all the way back to ‘Big River’ at @marriotttheatre when I was 19!!!” she wrote. “Ooh this was fun! Did u catch them all? Which is your fav??” 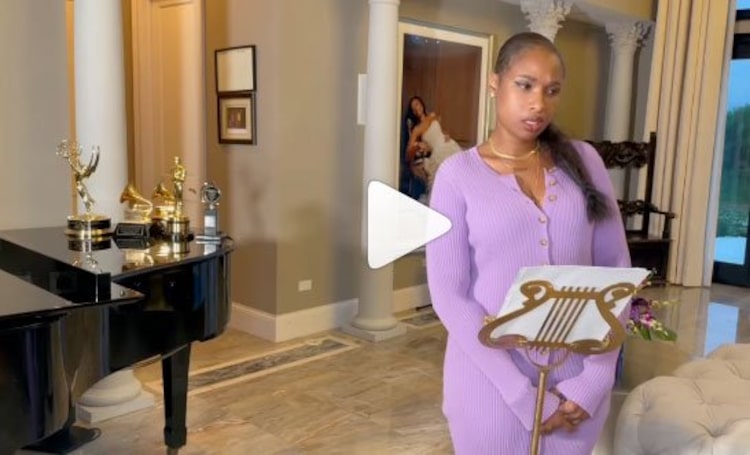 While Jenn is proud to display her awards on the ’gram, she didn’t always have her sights set on EGOT status.

“I didn’t know what an EGOT was, okay?” she said about winning the 2006 Best Supporting Actress Oscar for her role in “Dreamgirls.”

“But you know, I got to give credit to my mother [Darnell Donerson]. She used to always say, ‘I think you can be an actress.’ And when I won an Oscar on my first film, and then once that ball got rolling, it was [“Dreamgirls” co-star] Jamie Foxx who was like, ‘Craziest thing is this girl has no clue what’s going on.’ And I still don’t! I still don’t!” Jennifer added.

Prior to portraying Effie White, Jennifer didn’t know much about the story in real life.

“I knew the music, but I didn’t know the story,” she added about branching out into acting after her mother’s vision. “And so again, I feel like people dream their dreams for you.”

To this day, Jennifer admits she is “still getting used to” her EGOT status but is proud to achieve this impressive feat.

Jenn made sure to honor those who came before her, including fellow EGOT winner Whoopi Goldberg.

“But I feel like everybody owes Whoopi. [She made people think,] ‘Oh! She could be like [EGOT winner Barbra Streisand] and have the EGOT.’”

In addition to her Tony and Oscar, Jennifer won two Grammys — in 2009 for Best R&B Album and in 2017 for Best Musical Theater Album — and a 2021 Daytime Emmy for “Baba Yaga,” an animated short that she co-produced.

Now she’s hosting her own daytime TV show. Is there anything this woman can’t do?