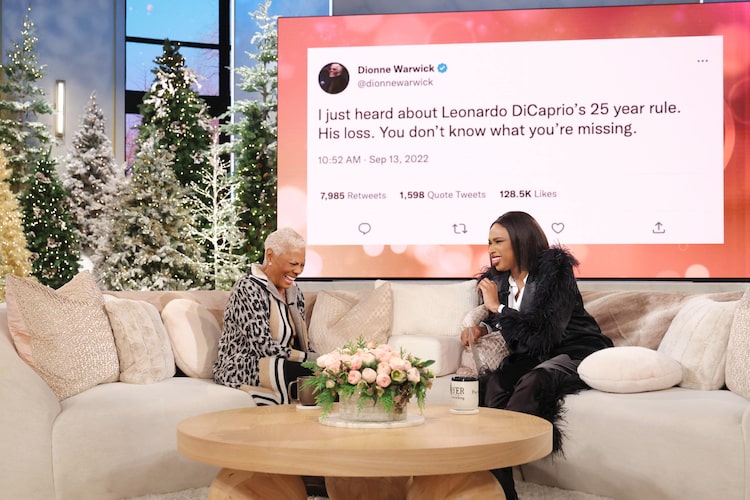 Legendary singer-songwriter Dionne Warwick graced “The Jennifer Hudson Show” to talk about her iconic career, setting the record straight on her real name, and dating Pete Davidson. What?!?!  Read on and find out!

Dionne laughs about it, but it turns out Leo did have eyes for a Warwick: the “Say a Little Prayer for You” singer remembers the time she met the Oscar-winning movie star at a benefit event, and she noticed him checking out her granddaughter!

Believe it or not, Dionne’s real last name isn’t Warwick — it’s Warrick! She explains that there was a mistake on the printing of her first record, and the typo inadvertently became her stage name. She was upset at first but decided to embrace it as her professional moniker.

Warwick may not be her real name, but it’s certainly served her well, we’d say!

Dionne on Being Her Own Glam Squad

When Jennifer fawned over Dionne’s gorgeous looks, Dionne revealed that she is her OWN glam squad! “My wardrobe is something I take great pride in,” she says. She tells Jennifer that her incredibly talented former makeup artist, Wynona Price, taught her everything she needed to know about makeup — though Dionne still prefers a minimalist look.

Dionne on Dating Pete Davidson: ‘If Everybody Else, Why Not Me?’

Dionne has one killer sense of humor. After news broke that Kim Kardashian had broken it off with “SNL’s” Pete Davidson, the singer tweeted, “I will be dating Pete Davidson next.” Get on it, Pete!

She quipped to Jennifer: ‘If everybody else, why not me?’

Dionne on Almost Getting Arrested: ‘It Was Wonderful’

Dionne has no shame about nearly getting arrested during the civil rights era. She recalled touring through South Carolina and stopping by a local restaurant for lunch. “I sat down. I know I wasn’t supposed to sit down, but I did. I was told immediately ‘You can’t sit there’ by a waitress… ‘You’re not supposed to be sitting.’” Her group was then directed to an area where they could stand to the side.

Dionne, who calls herself “a hoodlum” from East Orange, New Jersey, says she wouldn’t take this indignity lying down. “I told her to take the food we were gonna order and stick it up her — ” she stops short, but you can imagine the rest.

Two or three minutes later, a police officer stopped Dionne and her group and got on their tour bus. Dionne spoke to him calmly but sternly and told him to get off the bus, and he did. She most certainly could have gotten arrested, but she knew she had to stand up for herself.

And that’s why she’s a legend!